Below are a few of the partnerships I have helped facilitate between brands and athletes.

Lindsay Arnold (Dancing with the Stars) 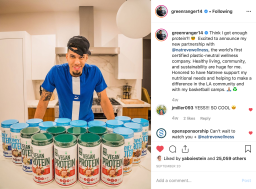 May 2019: Ellie Activewear strikes a deal with Dancing With The Stars celebrity Lindsay Arnold.

August 2019: Universal Beauty Products capitalizes on the WNBA season and the success of the Las Vegas Aces through their partnership with Tamera Young.

October 2019: Coverage in Forbes of the Green & Natreve relationship.